Is it time for your parent to move to an assisted living facility? 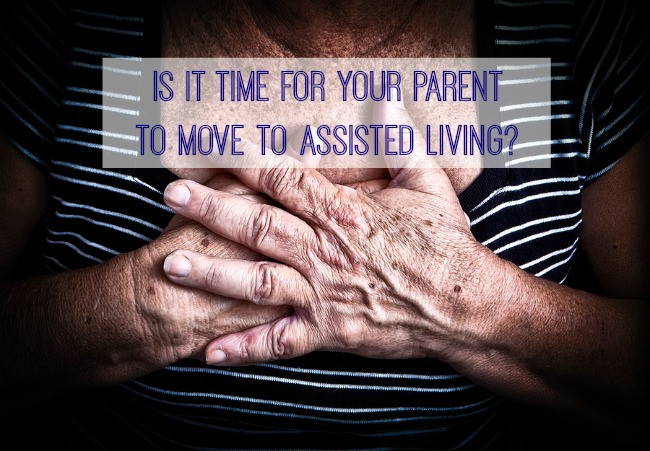 Is it time for assisted living? How to help your parents through the transition

Americans are living longer than ever before, with the average life expectancy now being 78.8 years. This increased lifespan has its advantages, allowing families to have multiple generations of family members. But as parents and relatives age, there are also some stresses if they can no longer manage on their own. It may not be obvious at first that a parent or older relative needs help with everyday activities, or it may come up very suddenly, after an accident, for example. Anne, who lives in Cincinnati, Ohio, lived through both these situations with her parents. Her father entered a memory care unit when he was 85 years old, and her mother went to live in an assisted living facility three months ago, at the age of 93. Her father has since died but she recalls the moment it became clear he needed more care. “My parents had been very healthy very late in life. Rather suddenly, we noticed that my dad had gotten ‘lost’ when out driving and doing errands,” Anne explains. “He was getting up and dressed for church in the middle of the night.” But it was a bout of dehydration that triggered a hospital stay, which was followed by some time in a rehabilitation facility, Anne says. “At that point, he needed to be admitted to [an assisted living facility] for memory care, for his own safety.” Anne’s mother’s situation started rather suddenly when she fell and broke her ankle. While she recovered physically and was able to return home, Anne and her siblings became concerned over their mother’s increasing anxiety. “The anxiety became unbearable and she got to where she did not want to be alone,” Anne says.

Warning signs that assisted living may be needed

Emotional and psychological changes, such as anxiety, can be one of many behaviors that may show a senior isn’t coping well alone. “Have there been any obvious signs or changes in their emotional state and/or social interaction?” asks Mark Winter, president of Hired Hands Homecare, in California. “Are there clear signs of being overly forgetful or confused?” Sometimes, sudden changes in mental status can be due to an illness, like an infection, or a side effect of medicines. If a doctor hasn’t been able to find a physical cause for the change, some sort of help at home or a move to assisted living may be the best option. Other signs that someone may need help include:

One problem many American families face is that of distance between family members. Many adult children live hours away from their parents or older relatives. This can add to their stress because they may not know how their relatives are coping. Susan Scatchell, the community liaison for A Abiding Care in Illinois, says that her agency sees an increase in calls around holidays when family members return home for a visit. “We usually see a blip in phone calls inquiring about home care services, as this may be the first time the adult children have seen their parents in a few months, and the home or personal conditions may be deteriorating,” she explains. Scatchell suggests that if family members can’t check in themselves, hiring an agency that can send a professional to assess the situation on a weekly or monthly basis may be a good solution. “This can help bridge the gap between the children, physician, and ER. This clinical professional can report to the family about what they observe.”

How siblings can ease the transition

Siblings may not always agree on the best way to help a parent, but cooperation is essential for a smooth transition to assisted care or assisted living. Anne is the closest, geographically, to her mother, but she and her brothers worked together to prepare their mother for the move to assisted living. “My brothers and I planned everything and worked very closely with the management and staff,” she says. “We would keep mom in the loop but try not to make her worry. We were very involved and each took on responsibilities and duties we were most suited for.”

What to look for in an assisted living facility

Preparing for a move into assisted care should begin as soon as possible – before it’s actually needed when possible. “Start the conversation early and before there is a medical event, because then you are in crisis mode,” Scatchell advises. “If you have a plan, you may not need to implement it. Families that don’t have a plan at all are the ones in crisis and make quick, uninformed decisions, feelings get hurt, and families get angry and resent each other over time.” Physical preparation is also important. Bonnie Charpentier, RN, Executive Director of Nursing at Partners in Healthcare, in Florida, says that downsizing is a good first step. Also, the parent or relative should visit four to six facilities that are close to family and friends, and within their price range. She suggests paying attention to: Scatchell adds that visiting a facility multiple times at different times of the day is also helpful in assessing its suitability.

When the best option is home health care

If the choice is to bring help into the home, rather than moving, Winter suggests keeping these points in mind when hiring an at-home care company: Anne and her family are happy with how things worked out for them. “I feel we made the best decisions possible for both of my parents,” she says. “I think my mom would say now that she should have moved to a retirement community sooner and not waited so long. She drove up to 92 years of age and, of all things, this is what she misses the most!” For people who are going through this in their family, Anne has these words of advice: “Realize that it is almost inevitable that a parent move to assisted living for safety and well-being and companionship. It is hard to think that your parents are eventually not going to be able to take care of themselves completely, but facing it is the first step. Always be positive and include them as much as possible.”